Horror Cards is a system of rules without a setting. It is intended mainly for narrative-heavy RPGs in the horror genre: games like Delta Green and Kult. 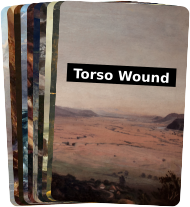 The rules of the game are available here:

In a role-playing game, agency is the ability to exert power over the shared narrative. Without player agency, the GM tells the players a story. With agency, striving players can mature into active participants, telling the story together. Agency can extend well beyond merely determining one character’s thoughts.

Agency is the central appeal of RPGs next to other media. Like any form of power, it is rarely turned down or thrown out. This is a problem in the case of the horror genre.

The emotion of horror is closely linked to the absence of control. In a horror game, PCs should be imperilled. The game should include sequences of genuine tension. It is in the interest of players to bring this peril—this tension—up to a peak and down again, not to minimize it. The central question that led to the development of Horror Cards is how to marry the benefits of player agency with horror.

As part of the system’s answer, player agency in Horror Cards does not extend to a buffer of physical safety. Continued fitness for participation in a planned scenario is not guaranteed after getting stabbed or shot. PCs have no special protection against being shot in the first place. This is by design. The familiar alternatives, a “health meter” ending in death, or the ability for players to buffer or buy off random chance, is too predictable: an unwanted form of safety.

The realistic threat of pain and disablement from injury is intended to raise more empathy than the threat of death. The downside is that fights and other action sequences can derail linear (low-agency) scenarios. To achieve a familiar dramaturgy, open with something less dangerous than a fight, or make it a set piece.

As another example of the management of player agency, Horror Cards allows players to choose a hard-boiled style, never being shocked in disturbing scenes. That comes at the cost of faster insanity, which eventually has the same effect on agency as death. Here the players choose the basic outline of their peril through minimal resource management. The system does the rest.

Freedom within these constraints is meant to enhance credible storytelling. It’s a compromise between agency and horror, not a perfect solution. In truth, any technical resource management in a game is inherently a distraction from the storytelling. Horror Cards reduces such interference by being brief and simple.

In the interest of simplicity, Horror Cards purposely fails to assist the most important aspects of character creation, including personal history, personality and sources of joy. Simple rules for such things are at least as damaging as they are helpful to competent players, in any scope as large and varied as a genre.

Also in the interest of simplicity, Horror Cards does not present an interesting economy with respect to the technical properties of the PCs. Such economies, and protections against powergaming, get in the way of people telling a story for its own sake. Players who enjoy technical optimization more than a good story will not be purposely obstructed by Horror Cards, but they will be bored.

For players who can dodge the bullet of wish fulfillment and do not enjoy rules, the GM should consider free choice of personal characteristics and free choice of cards for all drawing of Wounds, Shock and Insanity, turning Horror Cards into a system of note-taking and ideas, instead of a game.

The rules are otherwise written to encourage mutual creativity and ease of adaptation. Pre-modern settings require only very light customization by the GM, in the form of removing inappropriate mental disorders from the decks.